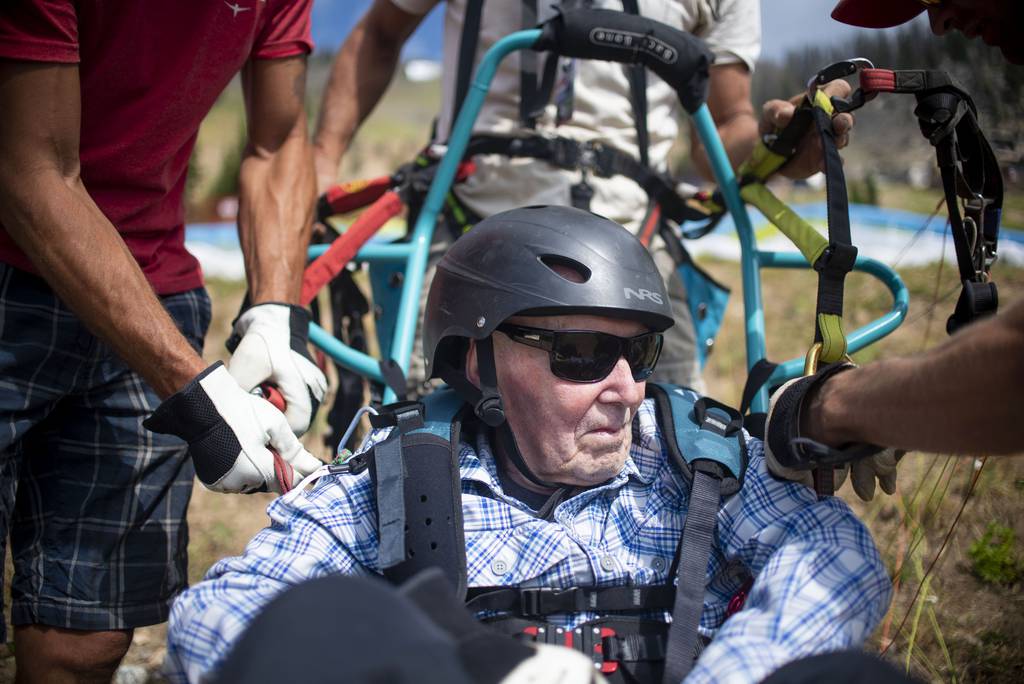 US veteran takes flight: It would be US Air Force veteran’s first experience flying, seated in a wheeled cart with a paraglider behind him. It would also be the record-setter for the oldest adaptive paraglider to fly in America.

Fred Miles doesn’t speak much, but he can hum his way around a melody. And the one coming out of his mouth this past summer as he looked down from the top of the Bridger Gondola at Jackson Hole Mountain Resort was “Take Me Home, Country Roads,” by John Denver.

But Miles, 103, wasn’t going home via a car or a road just yet. First, he was going tandem adaptive paragliding.

It would be his first experience flying, seated in a wheeled cart with a paraglider behind him. It would also be the record-setter for the oldest adaptive paraglider to fly in America.

But as his son, Greg Miles, reminded his father just before the flight, it would be far from his first time navigating the skies, the Jackson Hole News & Guide reports.

“Part of the reason you’re not going to have a problem is because of your flying experience,” Greg, a former town councilor, told his father.

“You’ve seen a lot of crazy things over the years, I’m sure,” Greg said, “so hopefully this will be enjoyable.”

The Air Force veteran Miles first piloted a plane 81 years ago after joining the United States Army Air Corps. This unit which eventually became the Air Force. He joined the force after graduating from Syracuse University with an engineering degree. He flew in WWII, again in the Korean War and afterward for some time, for a total of 30 years.

During his time in the military, Miles once nose-dived his plane into the Bodega Bay in northern California — where he was stationed and where he met his wife — when its engine caught fire. He survived only because a fishing boat picked him up and laid him against the boat’s engine for warmth.

But that was about a half-century ago and a few things have changed.US veteran takes flight… (continue reading)