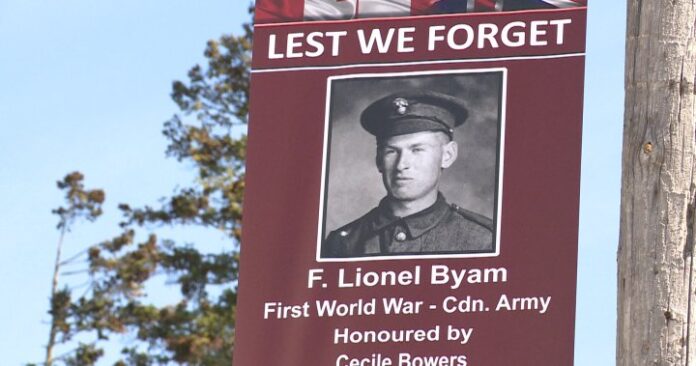 A small community in Clarington, Ont. is paying tribute to Canada’s veterans with the installation of collection of personalized banners, following the lead of other communities in the area and wider region.

Nine red and white banners now dot the main street of Tyrone, Ont., each displaying the name and picture of a veteran under the bolded heading, ‘Lest We Forget.’

One of those tributes hangs outside the historic Byam’s General Store. It features the shop’s former owner, F. Lionel Byam, who served in the First World War.

“I cried when they put the banners up,” said his granddaughter, Cecile Bowers, who sponsored the banner along with her brother.

They also contributed to a poster of their father, Walter Park, who she said fought and was badly injured in the Second World War.

The banners, put in by Royal Canadian Legion Department 178, purpose to place a face to the veterans of previous wars. Bowers mentioned that’s particularly necessary for younger folks, describing a latest expertise with kids exterior her grandfather’s retailer.

“They seemed on the banner, ran out and skim the signal on the entrance of the shop — which says ‘Byam’s Basic Retailer’ — and people youngsters discovered one thing that day,” she mentioned.

“Yes, they’re heroes for this, but they’re more than heroes,” said Doug MacCheyne, who is on the banner committee of Branch 178, which serves the Clarington area. “More and more of them came back here and they created the society that we have today.” (continue reading)