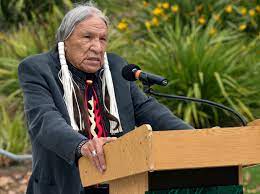 Saginaw Grant, a Marine veteran who served during the Korean War then went on to become a prolific Native American character actor and hereditary chief of the Sac & Fox Nation of Oklahoma, has died. He was 85.

Grant died peacefully in his sleep of natural causes. He closed his eyes on July 28th at a private care facility in California, said Lani Carmichael, Grant’s publicist and longtime friend.

“He loved both Oklahoma and L.A.,” Carmichael said. “He made his home here as an actor, but he never forgot his roots in Oklahoma. He remained a fan of the Sooner Nation.”

Born July 20, 1936, in Pawnee, Oklahoma, Grant was a U.S. Marine Corps veteran who served during the Korean War, according to the Chicago Community Trust.

His acting career began after being approached to appear in a Chrysler commercial. In the late 1980s he began acting in character roles, with early credits including “War Party” (1988), “Harts of the West” (1993-94) and a 1993 episode of “The Young Indiana Jones Chronicles” where he played Grey Cloud opposite Harrison Ford.

In addition to “The Lone Ranger” and “Breaking Bad,” Grant also appeared on “Baywatch,” “My Name Is Earl,” “Saving Grace,” “American Horror Story,” “Shameless,” “Community,” “Workaholics” and “Veep,” according to his IMDb page.

Grant was active for years in the powwow circuit in California. He traveled around the globe to speak to people about Native American culture, Carmichael said.

“His motto was always respect one another and don’t talk about one another in a negative way,” she said. (continue reading)